itting on a comfy sofa in
the 1931 Georgian Revival
home built for John Schoolfield, Jr., the scion of the mill dynasty that became Dan River Mills, Kim Gentry recalls the time she and future husband, William, met more than 20 years ago. “I was a DCC student and bartender at Bogies on South Main Street and he frequently came in during the week for lunch,” remembers the Danville native. “At the time, he was co-owner of Piedmont Precision Company on Goodyear Boulevard,” she says, referring to the company that builds components and machines for industries throughout the world. With a bit of nostalgia in her voice, she continues, “We were formally introduced one day while I was working as a substitute hostess.” That fortunate encounter led to marriage less than two years later and a move to Caswell County, North Carolina, where William had designed and built a rustic A-frame house for them. “Five years later, when our oldest daughter, Allie, was born, we needed to be back in Danville,” she says, recounting the daily round-trips for pre-school and other errands that caused them to think about relocating.

To solve the commuting problem, William and Kim bought a house that needed renovation in Danville’s first automobile suburb, Forest Hills. “We thought it was worth the challenge and the nine months it took to remodel it,” she explains. “We gutted the house and enjoyed making it our own. We lived there for eight years and loved it.” Fortunately, the house was ready in time for the arrival of their second daughter, Elizabeth, in 2002.

Although the new home was perfect for the family of four, more space and privacy were eventually needed for the growing girls. William and Kim eyed the house across the street at 242 Hawthorne Drive and when it went on the market, they made an offer. The mansion and guest house with nine bedrooms and 13 bathrooms, which was known in the community as the Leggett Mansion for 40 years, became theirs on April 15, 2011. This beautifully decorated, well-maintained house didn’t need extensive renovation like their previous one. In fact, only three years after moving into the elegant home, Kim and William are preparing to open its doors to local and out-of-town visitors for Virginia Historic Garden Week.

Having hundreds of tour takers walk through her home doesn’t faze Kim. “I’m more worried about the dance recital that week,” she says, laughing and thinking about Elizabeth’s and Allie’s participation in the recital at Meredith Gravely School of Dance. “It’s more intense getting both my girls ready for 11 or 12 dances. The rehearsals and shows are all week and the tour is only one day,” she says putting everything into perspective. “William will help me and make sure I’m not losing it.” Their house is one of several sites featured this year on the Danville portion of the oldest statewide garden and house tour in the United States. The money raised throughout Virginia is used for the restoration and preservation of the state’s historic public gardens including the grounds surrounding the Sutherlin Mansion in Danville, Mt. Vernon, and Monticello.

The preservation of historic buildings and gardens is high on the list of the couple’s interests. William, who was born in Greensboro but moved to Danville at an early age, has become a major player in the revitalization of Danville’s River District. His most recent historic renovation was the conversion of a Craghead Street building into the Golden Leaf Bistro that was completed in July 2013. Kim explains how it happened, “When Fender’s closed, we realized Danville needed a similar restaurant. He came home one day and announced, ‘I’m opening a restaurant.’” Within months, the renovation began and Taylor Alvis was hired as general manager. “William thought Danville needed it, so he did it. When he saw what was happening downtown, he became very involved,” she says, referring to several buildings that were purchased in the area including the former Dixie Bags on Ridge Street. “He finds the real estate exciting.” Making plans for the future while preserving the past seems to be an appropriate motto for this couple. Not only are Kim and William living in an historic home, they are helping to save Danville’s historic buildings for the community—one building and garden at a time. 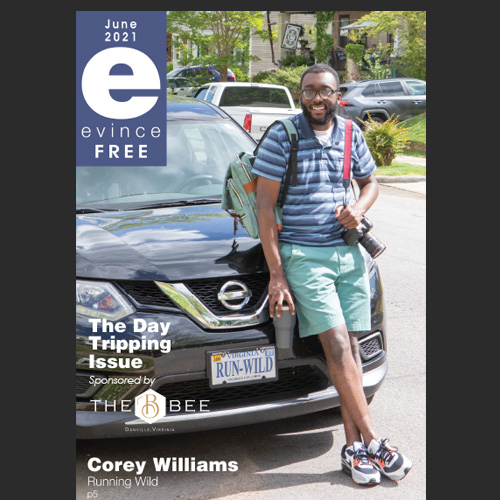